Death In The Air 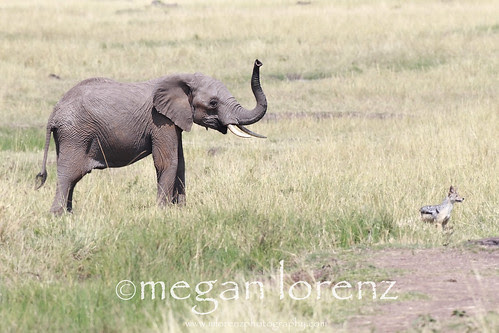 Death In The Air, a photo by Megan Lorenz on Flickr.

It will be interesting to go through my sightings log after I return because at this point I've lost track of the number of lions I've seen in South Africa and Kenya...I do know that it's over 50. Each encounter has been special to me but there have been a handful that will stick out in my memories of Africa.

There's nothing like watching an adult male tearing apart a wildebeest within 10 feet of the road. The females who did all the work...waiting for their turn to feast along with three of their older cubs.

Then a small breeding group of elephants join the scene along with a black-backed Jackal who you can tell really wants to steal just a small piece of the prize but there's no way he's going to go up against this strong pride. Instead, he paces back and forth and continuously sniffs the air....

The adult elephants are unnerved while the younger ones are curious and don't seem to realize the danger they could be in.

Luckily for them, the male is happy with his meal and has no interest in the newcomers as long as they don't get in his way. It would be foolish of him to go after such a well-protected baby.

One lioness is tired of waiting and is watching the male carefully. As soon as he stops eating and lays down 5 feet from the wildebeest, she takes the opportunity and starts to feed. The male leaps to his feet and angry roars fill the air. The female retreats with a few cuts from his long claws and makes her displeasure known by snarling at the male before joining the cubs.

His meal is beginning to bake under the hot Kenya sun. (How can something smell so bad when it's only been dead for a few hours?! Glad I had Vicks Vapor Rub so I could enjoy these moments.)

He decides to drag the wildebeest down a small ditch, across the road right in front of my vehicle leaving a blood-soaked trail and up the hill on the other side to an acacia tree that will provide shade so he can have a nap before resuming his meal. He needs to take several breaks on the way up, panting heavily. It's a hot day with no clouds and even though much of the wildebeest has been eaten....it's still heavy and awkward.

His pride follows him up the hill but at a distance. They will have to wait their turn, he's not in a sharing mood.